A leading dinosaur paleontologist at the University of Calgary is helping researchers across the world to learn more about how the dinosaurs lived. Until now, the only dinosaur eggs ever discovered had been hard-shelled. All these eggs belonged to only a few groups of dinosaurs while eggs from other groups were completely missing from the fossil record — and scientists had no idea why.

The answer to the question that had long evaded paleontology researchers came from recent fossil finds, most notably a nest of a horned dinosaur from Mongolia called Protoceratops, as well as eggs of a primitive long-necked dinosaur from Argentina called Mussaurus. These eggs had one obvious and unusual thing in common: the eggshell was unusually thin for their size, almost paper-thin.

In a recent paper published in the journal Nature, Dr. Darla Zelenitsky, PhD, in the Department of Geoscience collaborated with Dr. Mark Norell at the American Museum of Natural History (AMNH) and Jasmina Wiemann at Yale University to learn more about the first soft-shelled dinosaur eggs ever discovered.

The number of known dinosaur nests increased dramatically in the 1990s, particularly in Asia and North America. At the time, research focused primarily on descriptions of the fossils and figuring out their parentage. The field has changed considerably in recent years, moving toward an interdisciplinary approach involving molecular, chemical, and microscopic analyses.

Zelenitsky began her graduate career working on dinosaur nesting sites of southern Alberta in the 1990s. Now an assistant professor in the Faculty of Science, she has been involved in several international collaborations that resulted in ground-breaking research on the evolutionary history of nesting and reproduction in these fascinating ancient animals.

Soft eggs, known in many living reptiles such as lizards, snakes, and turtles, are composed mainly of shell membranes, giving the eggs a leathery appearance. In contrast, birds, crocodiles, and some turtles produce mineralized hard-shelled eggs.

Although the dinosaur Protoceratops eggshell resembled that of modern soft eggs, the researchers needed to verify this with other analyses. Norell had discovered the Protoceratops fossils, and Wiemann, a PhD candidate at Yale, developed novel methods to analyze chemical products of protein fossilization in dinosaur eggs, which confirmed that Protoceratops and Mussaurus eggs were soft-shelled rather than hard.

The researchers’ results explain why eggs had never been found for several dinosaur groups.

“It had crossed our minds long ago that some dinosaurs could have laid soft eggs, but the evidence wasn’t there,” says Zelenitsky. “Such eggs were not only difficult to fossilize, but also for paleontologists to find and identify. Thanks to discoveries by the AMNH and to Wiemann’s ingenuity, we now have that evidence.”

Zelenitsky suspects that soft- versus hard-shelled eggs reflect differences in nesting among dinosaurs, as eggshell architecture is closely linked to nesting style in living reptiles and birds.

The soft eggs of Protoceratops were likely incubated in buried nests to prevent desiccation, like those of living reptiles. In a paper published in the journal PNAS in 2017, Zelenitsky and Norell teamed up with Dr. Gregory Erickson at Florida State University to examine embryo tooth microstructure to determine the incubation time of Protoceratops eggs. The eggs were shown to take a long time to hatch, much longer than birds. The soft-shelled eggs, buried nests, and very long incubation times found in Protoceratops are similar to those seen in reptiles today.

However, not all dinosaurs nested like reptiles. Many dinosaurs produced hard-shelled eggs, with an eggshell architecture similar to that of birds.

For example, oviraptorids are a group of bird-like dinosaurs that laid such hard eggs. The largest known hard-shelled eggs, exceeding 40 centimetres in length, were identified as belonging to a giant oviraptorid and published in a paper in 2017 in Nature Communications  in which Zelenitsky collaborated with Chinese researchers, notably the late Dr. Junchang Lu (Chinese Academy of Geological Sciences).

Zelenitsky and Lu conducted additional analyses with top Japanese researcher Dr. Kohei Tanaka (University of Tsukuba) and revealed, in a paper published in Biology Letters in 2018, that all oviraptorids laid their eggs and incubated them in open nests, similar to birds.

Zelenitsky plans to continue international collaborations with researchers from around the world to further study and gain understanding of dinosaur nesting behaviours.

Darla Zelenitsky at work in the lab. 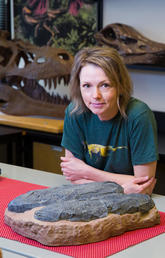 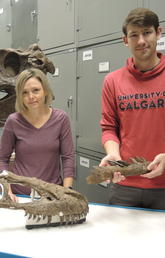 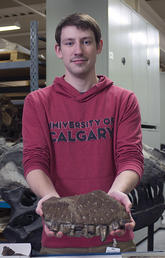